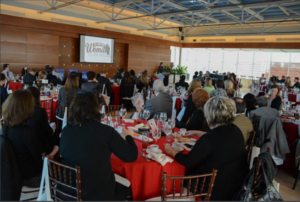 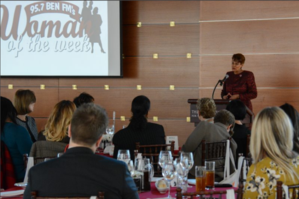 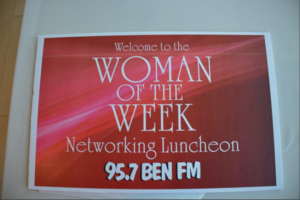 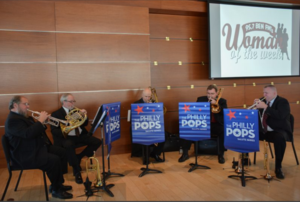 Underneath the iconic architecture of the Kimmel Center’s Hamilton Garden Room, BenFM hosted its annual Woman of the Week luncheon.  More than 50 successful and influential females from across various industries gathered to celebrate one another and their accomplishments.

The lunch, led by BenFM mid-day host Kristen Herrman, included live entertainment from the Philly Pops. Held the day before Veterans Day there was a sense of patriotism in the air, and a theme of service and volunteerism as each speaker touched on just how powerful women can be when they come together for an important cause.  Crystal Brewe, Vice President of Sales and Marketing for the Kimmel Center briefly spoke about the incredible slate of events scheduled throughout the holiday season at the Kimmel Center.

Keynote guest Karen Corbin spoke about the many community and educational initiatives she has championed over the last year in her role as Vice President of the Philly Pops.  In the city, the Pops now offer a number of free concerts on various holidays such as Memorial Day and the Fourth of July. The Salute Series aims to bring the community together through music. Corbin encouraged guests to thank those who have served not only on these important holidays, but every day.

The most passionate speech of the day was given by Judge Renee Cardwell Hughes, CEO of the American Red Cross of Eastern Pennsylvania. Hughes reminded the audience of the Red Cross programs that go beyond disaster relief and blood donations.  She told stories of mothers who’s chilrend

She urged the audience to give 100% every day in life – and then to find just 10% more to give back to something they are passionate about. GLA annually organizes a blood drive with the Red Cross, and encourages scholars to give back to other causes that positively impact the community and beyond.